One of my favorite stories happens on Resurrection Sunday on a 7 mile stretch of dirt road between Jerusalem and a small village called Emmaus.  Two of Jesus’ followers, one of them named Cleopas, were walking along on their way home from what they thought was going to be a normal Passover.  Their faces were downcast as they spoke of the things that had happened.  Have you ever walked along a rutty uneven dirt road?  In sandals?!  I’m feeling pretty good when I lace up my new tennis shoes and walk four miles on pavement.  They had plenty of time to talk. 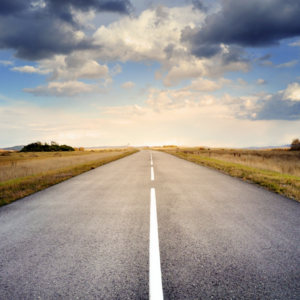 Jesus showed up and started walking beside them.  They didn’t recognize Him though.  He asked them what was going on and they could not believe there was anyone that didn’t know.

They began to tell this stranger about the events of the last three days.  ‘His name was Jesus. We thought He was the One. They crucified Him!  We saw Him die, mourned His death.  The women went to tend His body this morning but they said He was gone and they had seen angels. We don’t know where Jesus or His body is.’

Can you hear the distress in their voices as they reasoned it out in their minds, even as they spoke?  Can you feel their loneliness?  The One they thought would lead the rebellion, their Rabbi, their Hope, their Friend…was gone.  Once again, the Romans and the Jewish leaders were stronger than anything or anyone the common people could come up with.  They were filled with despair. A dirty sandal kicked at a rock, a hand reached up to Heaven, eyes could barely make contact with this stranger who seemed so clueless about their pain.

Have you ever felt alone?  Even in the presence of others?  Has the road ahead ever looked dirty, rutty and long?  In this season of quarantine, I think we have all felt it in different ways.  What does our future look like?  Some worry about their jobs.  How will I take care of my child?  Divorce and child abuse are up.  Alcohol sales are up.  Let’s put those last two together.  In my past, loss has made me feel lonely.  Betrayal has left me lonely.  Worry has left me lonely.  Watching others participate in things that I could not afford has made me feel lonely.  And sometimes, I think lonely just starts and ends right inside of my head.  How about you?

Jesus listened to their story and then He began to speak.  ‘Have you guys not been paying attention?!  Didn’t the Messiah tell you this was coming?’ (my own interpretation)  Then in His patient and kind manner our Lord began to retell them the story.  He started with Moses and the Prophets (what’s it like when Jesus tells you about Elijah?!) and He told them the Scriptures about Himself!  His stories felt like water to these thirsty travelers and before they knew it, they had walked the seven miles to Emmaus.  As He started to leave, they begged Him to stay with them and keep teaching them.  Jesus agreed.  They sat at the table and Jesus took the bread, gave thanks and broke it.  As He began to hand them a piece their eyes were opened and they recognized the One who had been on this journey with them. (The Bread of Life will do that…open your eyes, help you see more clearly, give you Peace.)  And then He was gone.  Somehow, I see a smile on Jesus’ face as He faded from their presence.

Weary traveler, pull your head up and see that you are never alone.  Talk to Jesus and let Him make your burdens lighter.  He broke that bread for you too.  See Him in your every day.  Open the Word and listen to His words of love and instruction.  When I am talking to Him every day my hard times go by faster.  I don’t stumble as often.  His words are sweetness and nourishment to my soul.  He loves you, no matter what part of that road you are on.  He will never leave you or betray you.  Often when the road feels hard it is because He is trying to change your direction.  Rely on Him.  He is trustworthy.  Kick a rock, raise your hands and look right into the eyes of your Savior.  You are not alone.  Be blessed.