I’ve never forgotten what it was like to be a kid and try to consider my own experiences when my son approaches a similar situation. For that reason, we’ve a small set of rules that we remind KJ of when approaching a play area.

“Is anyone obligated to play with you?”

“Do you own the playground?”

“Are you the boss of the playground?”

“Are the other kids the boss of the playground?”

Once KJ acknowledges the list, he’s free to play. On this day, we visited a restaurant with a playground. As we awaited our order, KJ went into the play area and I observed on the other side of a clear pane.

Two little girls arrived. One appeared to be about four years old, the other about eight. KJ was five at the time. He greeted them and continued playing. The two joined the fun, with all the kids taking turns climbing up the slide and sliding back down. At some point, the older girl got an idea into her head that no one could use the slide. Not even her little sister. She planted herself at the bottom, blocking the opening. Discouraged, some of the younger kids exited the playground. KJ, who’d decided to ignore the girl, went down the slide repeatedly. When she would attempt to block him in, he would simply slither around her. Seeing that KJ was paying no mind to the girl’s demands, others began to resume playing, including the girl’s sister. Still, the older girl stood at the bottom of the slide yelling at those who tried to use it. In minutes, most of the kids still on the playground confined themselves to the opposite end of the structure.

Finally, KJ had enough. Planting himself in front of her, he delivered a speech loud enough for me to hear through the pane (and those who know him won’t find that surprising).

Absolute silence. KJ then continued to play, seemingly unaware of the effect of his words. Within seconds, all the kids began using the slide again, maneuvering their way around the little girl, who left after it was clear no one would acknowledge her blockade.

Later while we ate, I asked him about what’d happened. Between fries, he explained that the girl wasn’t letting anyone play and that wasn’t fair.

“So, what made you say something, sugar?”

“Well, you always say that none of the kids are the boss on the playground, so I told her that.”

I’d be lying if I said my initial response wasn’t a shocked chuckle. Hearing my own words coming out of my son’s mouth was a bit jolting, to be honest. But it taught me two things. One, he is actually listening. Two, he uses the information given to him by his parents to take control of a situation.

I can’t help but think of how much more our Father wants us to use the information He’s given us to take control of situations in our lives. How much does He long to hear His own words come out of our mouths in a way that allows us to assert ourselves over our fears, or the bullies in our lives? Next time you’re faced with a difficult obstacle, or some fear makes you feel like a little kid on the playground again, remember whose child you are and what He has said to you. 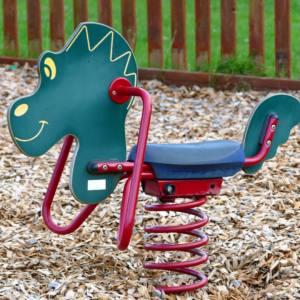 9 Have I not commanded you? Be strong and courageous. Do not be frightened, and do not be dismayed, for the Lord your God is with you wherever you go.” Joshua 1:9 ESV